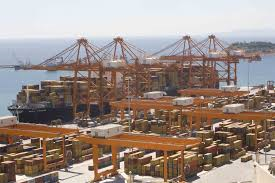 Piraeus Port Authority (PPA) signed a revised EUR 230 million concession agreement with and Chinese company Cosco Pacific Limited, through its subsidiary Piraeus Container Terminal (PCT) on Thursday, November 27th. The deal will see EUR 230 million (around USD 286 million) invested into the construction
of the West Pier III Container, the construction of Pier Petroleum on behalf of the PPA and the installation of new machinery in Piers II and III.

The port authority said that the revenue generated by the overall operation of Piers II and III of the Container Terminal managed by PCT SA, PPA will receive 24.5%, ie in 2021 based on budgeted figures amount of 109.314.280 Euros, as that is its current turnover. After the signing ceremony, the President and Managing Director of PPA SA Mr. Yiorgos Anomeritis stated: “A significant development project with cost EUR 230 million with concession contract has been signed today, making Piraeus one of the most modern and big freight ports of Europe.

The PPA as owner becomes port of great value and annuities, in favour of the public interest, the port industry and the development of the country.”

“The biggest issue in the country is to develop. It is the basic parameter that can give vent, along with other management, to the public debt problem. And only on the issue of development deserves all political and economic factors of the country to sit at the same table in order to achieve fast pace and yields.” The plan was already approved by the Piraeus port shareholders.
a 05:30