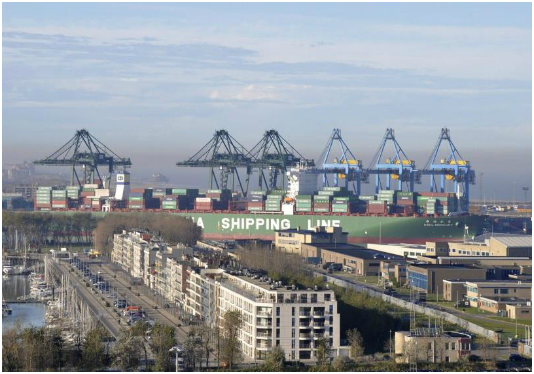 During the first half of 2014, Belgium’s Port of Zeebrugge freight tonnage surpassed 22 million tonne mark, marking an increase of 3.7 percent compared to the first semester of 2013. 22 Mln tones total freight
handled at the port. The best results were set in the container sector and the roll-on/roll-off traffic. “We are pleased that the Port of Zeebrugge handled almost 1 million tonnes more freight than it did during the first half of 2013. This makes us cautiously optimistic, as the maritime world still faces great challenges,” said Joachim Coens, CEO Port of Zeebrugge.

Roll-on/roll-off traffic rose with 5.8 percent to 6.6 million tonnes, thanks to the strong economic repair in the United Kingdom. In the number of new cars passing through Zeebrugge, there was an increase of 12.7 percent, to 1,061,866 units. With this result, the port is well on target to top 2 million cars by the end of the year. Container traffic was up with 10.2 percent and ended with 10,952,836 tonnes.

This is 1,056,311 TEU and a rise of 9.9 percent. General cargo fell down 35 percent, reaching a total tonnage of 600,304 tonnes. Fewer building materials for the construction of wind mill parks in the North Sea were transported. Also, the import of paper pulp from Brasil and Sweden dropped. Liquid bulk lost 4.7 percent and reached 3.2 million tonnes.