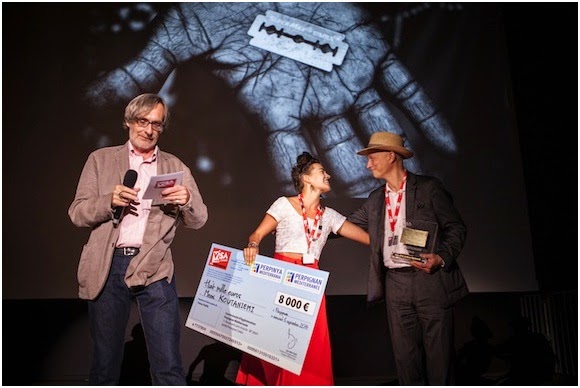 Echo is extremly proud to announce that photographer Meeri Koutaniemi is the winner of the Visa d'or - Daily Press Award 2014 for his story "Taken" about female genital mutilation, pubblished by Helsingin
Sanomat. Taken "The room was dark, and it was so full of smoke that it was difficult to breathe inside. Nasirian was tied from her arms and legs. The girl was strong and struggled. Six women were on all fours on the ground and tried to keep her down.

He was not numb, and no pain relief was used on her. Except a bucket of cold water poured into her naked body. One of the ladies revealed an ordinary razor blade in her hands for the mutilation. Nasirian cried and the floor was streaming from blood. The more she leaked, the more she screamed. After few minutes her genitals were completely unrecognizable. " Nasirian and Isina are 14-year old stepsisters in a small Masai village, South-West Kenya. They have been advised not to cry during female circumcision. The genital cutting is said to be done to get them married in the future.

The World Health Organization estimates that there are more than 140 million mutilated women in the world. Female genital mutilation is a tradition practiced worldwide in 29 countries, mainly in Africa and Middle-East. Muslims follow the old way of the tradition, but equally Christians and practitioners of nature religions. Girls' circumcision has been illegal in Kenya since 2001, but among some tribes such as the Masai people, it is still a valued tradition.

The tradition stems from the belief that woman's sexual organs are considered to be impure. The intention is also to reduce women's sexual pleasure, and thus women's adultery . In some places the girls are cut as infants, others are only in their teens. The violent operation differ from cutting off a small piece of the clitoris and the removal of all external genitalia: the clitoral hood, the clitoris and the minor and major labia. Sometimes the mouth of the vagina is sewn shut leaving a small hole for urine, menstrual blood and sexual intercourse. Surgery is usually done under primitive conditions and girls are subjected to a variety of risks. The girl can die because of the pain of shock and blood poisoning.

Later, women may suffer from persistent infections, and urination and intercourse can be painful, and giving birth life-threatening. Female genital cutting has been widely judged as a procedure against human rights and as a serious violation against women's sexual independence.
a 05:00