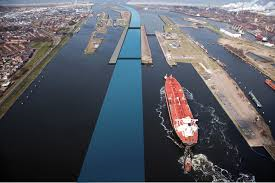 The City Council of Amsterdam approved the acceleration of construction of the new large sea lock in IJmuiden, yesterday, November 26. Amsterdam mayor requested from the City Council to approve EUR 105 million (USD 132 mill) in funding for construction of the new sea lock system at IJmuiden, at the end of
October. The current complex dates back from 1929 and doesn’t meet the technical requirements to accommodate modern age ships as they increase in size and complexity, according to the port officials, who were very pleased with the Council’s decision.

Port of Amsterdam CEO Dertje Meijer said: “Great news! The new, larger sea lock will be good for the port, the region and the business community in the area. With this decision, the City Council of Amsterdam is investing in the future and in sustainable growth for the Amsterdam Metropolitan Area.” According to the port authority, the new large sea lock will safeguard the ongoing accessibility of the ports and businesses along the North Sea Canal, including for large vessels with deep drafts. “This means a big boost for the port region and the Dutch economy,” the port authority said in a release.

The initial plan by the national government was to replace the locks no later than 2029, however this date seemed to be too far away as the port may reach its maximum capacity of 95 million tons already in 2020. The Port of Amsterdam said that the new lock system would allow the port to increase its capacity to 125 million tons. The total cost of the project is estimated to be EUR 889 million, of which a considerable portion should be assigned by the EU.

The project received an EU subsidy for the planning study phase as part of the Trans-European Transport Network (TEN-T) programme. A subsidy application is also planned to be made relating to the implementation stage of the project.
a 05:30