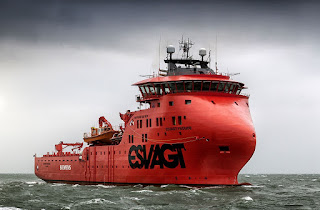 The shareholders behind ESVAGT have announced the sale of ESVAGT. 3i Infrastructure plc and AMP Capital, two international infrastructure investors, have entered into an agreement to jointly
acquire 100% of Danish company ESVAGT from Maersk Group and ESE-Holding A/S. The sale amounts to a value of DKK 4.1bn equalling to approximately USD 610m.

Excelling in providing safety and support at sea, ESVAGT has since 2009 more than doubled its turnover and is one of the industry's most profitable companies. The company is in a strong position to continuously develop its wide range of specialized offshore services and grow further.


”ESVAGT is a sound, well-run company with an exceptional operational excellence, and we have assessed how we best serve ESVAGT’s long-term interest, as they are not part of the Maersk Group’s core business. The sale to 3i Infrastructure plc and AMP Capital has proven to be the best way of ensuring that ESVAGT can continue its development based on a strong culture and heritage, while at the same time creating value for the shareholders,” said Maersk Group CFO and Chairman of the Board in ESVAGT, Trond Westlie.

Kent Kirk, co-founder of ESVAGT and shareholder in ESE-Holding A/S, commented:“ESVAGT was founded in 1981 to abate unemployment in the fishing industry. Many skilled employees, both current and former, have been employed by the company, and we are happy to have been able to offer a large number of young people a career at sea,” he said.“Almost 25 years of collaboration with the Maersk Group has meant ESVAGT is now industry leader when it comes to safety at sea. We are happy that by selling to 3i Infrastructure plc and AMP Capital, we have found a shareholder group who will invest with the long-term perspective.”

With ESVAGT’s strong market position and a long-term growth strategy, which is expected to support continued profitable growth, the new shareholder group is dedicated to build on ESVAGT’s business strategy and well-known operational excellence.


Ben Loomes and Phil White, Managing Partners and Co-heads, Infrastructure, 3i Investments plc, commented:“We are pleased to be investing in ESVAGT, a leading provider of emergency rescue and response vessel services to a diverse customer base in the offshore oil and gas industry. ESVAGT has a successful history in its core markets, Denmark and Norway. With a strong and defensible market position, the business is well placed to replicate its success in overseas markets and leverage its expertise to expand in the offshore wind sector. We look forward to working with the ESVAGT management team to build on the success of the business and deliver attractive returns to 3i Infrastructure’s shareholders.”