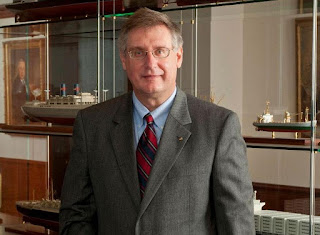 (Houston) Christopher J. Wiernicki, the Chairman, President and CEO of ABS, a leading provider of maritime shipping and offshore classification services, was elected Chairman of the International Association of Classification Societies (IACS) on July 2, 2015. Previously the position was held by
Philippe Donche-Gay, the Executive Vice President and head of Marine & Offshore at Bureau Veritas. Like his predecessor, Wiernicki will lead IACS for one year.

The election of a new Chairman took place during the 71st meeting of the IACS Council. The Association also updated its strategy and action plan for the coming year.

Wiernicki says the plan is balanced in that it incorporates both new and existing commitments to industry issues as well as the continuation of work involving the safety of complex operating systems.

He also reflected about the importance of IACS, the role it plays in maritime safety and its work as the recognized technical advisor to the International Maritime Organization.

“The implementation of increasingly complex requirements and emergence of new technologies can prove problematic,” he added. “The complexity of these challenges is such that the role of IACS is more important than ever.

“At the same time, the success of our objectives continues to hinge on deeper collaboration and stronger partnerships with industry, which is something we must continue to strengthen in the months ahead.”

IACS intends to host a press conference with its new Chairman in London in late September. Details will follow.
a 05:30