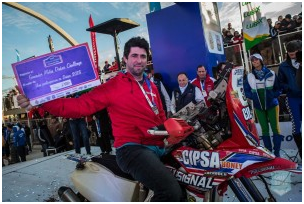 It is the toughest competition of the planet that counts on three new participant that got the prize after Desafío Guaraní for the best amateur competitors of each
category.

As every Dakar Series, Desafío Guaraní granted for the first time tickets for amateur competitors that had never taken part in a Dakar before. This way, a competitor in the the car’s category, another one in quads and another one in bikes will have the possibility of debuting in the most extreme race of the world in 2015.
The Argentinian Kevin Echeveste (Honda CRF 450) got half of the entry for the bikes category. Then, Beto Ramírez (Yamaha Raptor) got the third position in the Quads 4×2 and got half of an invitation for Dakar 2015.
In cars, the locals Rubén Irala and Enrique Fratta (Toyota Hilux) got a complete ticket after they finished eighth in the Car’s overall Standings and being the best Challenge drivers in that category.
Irala was surprised after what he had achieved in his country: “My co-driver and I cannot believe it. I’m so happy. We were 18th and we ended up fourth, for us it is a complete success”.


In terms of the chance that Desafío Guaraní had given then, the driver stated: “Now there’s one more commitment. We were doing well, and I don’t know if we’re doing so well now. It’s my illusion, I’ve always wanted to race in a Dakar and we’ll see if we can make it this year” stated Irala with excitement.
a 05:30