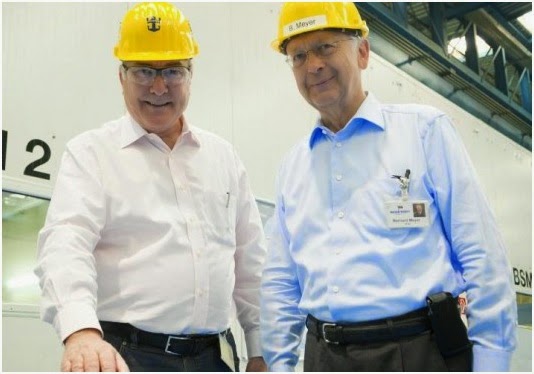 The first piece of steel was cut at Meyer Werft in Papenburg, Germany for the construction of the third ship of Quantum class for Royal Carribean International, the shipbuilder informed. Richard D.
Fain, CEO of Royal Caribbean Cruises Ltd., pushed the button of the plasma torch as the first plate of steel was cut by the plasma torch in the yard’s state of the art facility “lasercenter”. The name of the third Quantum class ship was revealed as well – “Ovation of the Seas”. Delivery of the ship is planned for spring 2016.

The sister ships, Quantum of the Seas and Anthem of the Seas, will be delivered in fall 2014 and spring 2015 respectively. The Quantum class ships will have 168, 000 gross tons and feature capacity of 4,200 passengers. “We are glad to continue the long lasting business relationship and build such innovative cruise ships for Royal Caribbean International”, says Bernard Meyer, managing partner of the company.
a 05:30