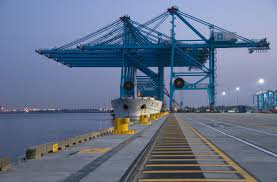 The Government of Mexico has announced plans to double port capacity over the next six years to meet anticipated trade growth, particularly on the trans-Pacific trade lane. “Mexico is a growing
transportation hub in Latin America with the second-largest economy in Latin America, and third-largest container throughput in the region.” APM Terminals Global Terminal Network sees Mexico as a key location in the strategic growth and infrastructure investment planning. In 2012, APM Terminals signed a 32-year concession for the design, construction and operation of a new deep-water terminal at the Port of Lázaro Cárdenas.

The project will represent an overall investment of USD 900 million. The first phase of the construction of Terminal 2 (TEC2) will include 750 meters of quay, five ship-to-shore (STS) cranes, 22 automatic stacking cranes and tworailway cranes, and will be able to accommodate very large container vessels. Preparations are underway for the first 300 meters of quay, which are scheduled to be ready in Q1 2015.

This will be followed by the installation of the container handling equipment. The completed terminal, which will add 1.2 million TEUs of annual throughput capacity, is projected to become operational in the first half 2016. A key component of the project will be an intermodal transport corridor linking the Lazaro Cardenas marine terminal with APM Terminals own intermodal facility in Mexico City.

Use of rail transportation will further reduce emissions associated with freight transportation, as well as safe and secure transportation of containers to inland destinations compared with truck haulage on highways. Container traffic at Mexican ports, dominated by Manzanillo and Lázaro Cárdenas on Mexico’s Pacific Coast, increased from 4.21 million TEUs in 2011 to 4.87 million TEUs in 2013, reflecting a growth rate of 15%, more than double the overall Latin American container volume growth of 6.7% during the same period.
a 08:15