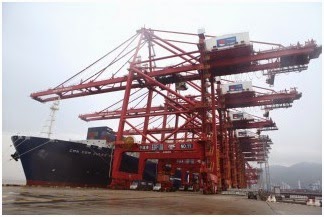 CMA CGM Jules Verne in Ningbo, China The European shipowners have called for removal of market barriers for international shipping in China’s ports at the 11th Implementation Meeting of the
China-EU Maritime Transport Agreement. The meeting, hosted by the Water Transport Bureau of the Chinese Ministry of Transport, was held in Haikou from 20 to 22 October. The agenda featured an exchange of views on shipping policy developments in China and the EU as well as a discussion on issues raised by the Chinese and EU shipping industries. Official delegations consisted of representatives of the Chinese Ministry of Transport, the Directorate-General for Transport and Mobility (DG Move) of the European Commission and EU Member States. Industry delegations were headed by the China Shipowners’ Association and ECSA.


“The key point for European shipowners in these maritime talks is to open up market access barriers for international shipping“, said Patrick Verhoeven, Secretary General of ECSA, who spoke on behalf of the European industry delegation. “The Chinese government started last year a promising Free Trade Zone pilot project in Shanghai which is expected to extend to other ports. But foreign-owned shipping companies are still not permitted to transport international cargo between Chinese ports. Only vessels that are ultimately owned by a Chinese company can do so, even if they fly a foreign flag. Lifting this discriminatory restriction will also benefit China, as it will not only bring increased revenue and more efficient utilisation of Chinese ports but also reduce transit times and transportation costs to and from the country.”

European shipowners further raised issues related to taxation, trade practices, port charges, navigational rules and vessel traffic services as well as procedures for exit and transit visas. The China-EU Maritime Transport Agreement was concluded in 2002 and entered into force in 2008 with the objective of improving the conditions under which maritime transport operations are carried out.
a 05:30