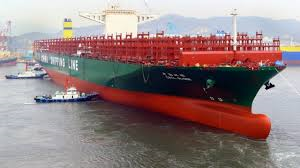 South Korean shipbuilding giant Hyundai Heavy Industries Co., Ltd. (HHI) announced today that it held a naming ceremony for the world’s largest containership, the first of five 19,000 TEU
containerships ordered from China Shipping Container Lines (CSCL) in May 2013. The containership was named CSCL Globe by He Li Jun, wife of Xu Li Rong, chairman of China Shipping Group. The world’s largest containership, measuring 400.0 m in length, 58.6 m in width and 30.5 m in depth, is as large as four soccer fields, and will be deployed on the Asia-Europe trade loop after being handed over to the owner within this month.

The CSCL Globe will feature a 77,200 bhp electronically controlled main engine to enhance fuel efficiency by automatically controlling fuel consumption according to the ship’s speed and sea conditions, HHI said. With the installation of the high efficiency engine, the containership will burn 20 percent less fuel per TEU in comparison with the 10,000 TEU containerships. HHI built the world’s first 10,000 TEU containerships in 2010 and since then it has built 82, carrying more than 10,000 containers in the world.
a 05:30