Port of Antwerp cranks up the volume 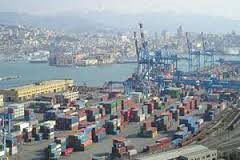 The port of Antwerp is expected to handle a total of 198.8 million tonnes of freight by the end of this year. That’s an increase of 4.2% in comparison with 2013 and a new record for the Belgian port. The previous record dates from 2013, when the freight volume came to 190.8 million tonnes. The Port
Authority says that the record growth was driven by container handling (up 5.6%) and liquid bulk (up 5.4%). The other side of the coin is the contracting volume of breakbulk (down 3.3%) and dry bulk (down 4.9%). The container trade shows growth, both in tonnes and in number of boxes. The number of standard containers (twenty-foot equivalent units) rose by 4.5% to 8.96 million TEU. Tonnage was also up 5.6%, reaching 108.1 million tonnes.

The ro/ro volume, however, was down by 1.2% to 4.51 million tonnes. According to the Authority, the figures are mainly due to a decrease in the number of cars handled. By the end of this year its is expected that 1.2 million cars will have been shipped in and out of the port of Antwerp, 7.8% fewer than in 2013. The lower volume is due among other things to the Ebola outbreak in West Africa, the unrest in the Middle East and the poor economic situation in Argentina and Brazil, all of which are important markets for second-hand cars.

This continued downward trend is caused by the decline in coal imports, due mainly to the closure of various coal-fired power stations in the immediate hinterland of the port. The Authority believes that this trend is not expected to reverse anytime soon. During the past 12 months 13,978 seagoing ships called at the port of Antwerp, 1.7% fewer than in the previous year. On the other hand the gross tonnage was up by 1.5% to 334.68 million GT.