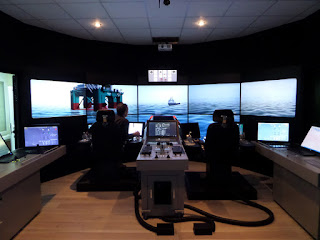 The simulation center of the Technical University of Varna has officially opened its new simulation wing on May 21st, 2015. Following the opening of its simulation center in 2012, the TU Varna has
known a steady growth and further expansion into a new simulator wing was required. All the simulators in the TU Varna training center are delivered and installed by VSTEP. The new wing features a NAUTIS Class B DP Simulator as well as a NAUTIS class A Full Mission Bridge Simulator and a new ECDIS Simulator classroom.

Simulator developer VSTEP was again the developer of choice to deliver and install its DNV certified NAUTIS simulators at the facility, including a NAUTIS DP Class B simulator and a NAUTIS Class A Full Mission Bridge Simulator. Using state of art simulation technology, the DP Class B simulator can be directly combined with the Class A FMB to form a fully multifunctional 360° Bridge setup. The bridge can also be transformed into a Full Mission Tug Simulator.
In addition to the DP and FMB simulators, the existing NAUTIS ECDIS Classroom has been extended with 5 new ECDIS stations. The NAUTIS ECDIS Classroom is now fully operational to provide type approved training for all current ECDIS systems, including Maris, Kelvin Hughes, NavMaster and SevenCS’ E-Globe which are all integrated into the NAUTIS ECDIS Systems.
Pjotr van Schothorst, VSTEP CEO:


“The necessity and opening of this new simulator wing reminds us of the importance and growth of the TU Varna as a maritime educational facility in the region. Following our cooperation with the TU Varna simulation center in 2012, VSTEP is proud to have once again been selected as the simulator supplier for this new simulator wing. The new DP simulator and Type Approved ECDIS simulator classroom allows the TU to proceed with a very extensive and state of the art curriculum of maritime training courses.”

The simulation center of the TU Varna is one of the most advanced training and education hubs in the region. Simulation developer VSTEP was selected as simulator contractor for the center in 2012 and has since delivered three NAUTIS Bridge Simulators, five Engine Room Simulators, an Incident Command Simulator, a DP Simulator and a full classroom with desktop ECDIS trainers for the facility.
a 05:30