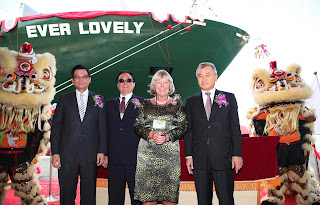 Evergreen Group held the naming ceremony for EVER LOVELY, the ninth of its L-type vessels to be built by CSBC Corporation in Taiwan and the penultimate vessel in the thirty strong series. The ceremony took place at CSBC’s Kaohsiung shipyard and was officiated by Mr. Bronson Hsieh,
Evergreen’s Second Vice Group Chairman. The official rope-cutting of the new 8,508 TEU vessel was performed by Mrs. Anna U. Obermeier, the wife of Mr. Pier Luigi Maneschi, Chairman of Evergreen Shipping Agency (Italy) S.p.A. EVER LOVELY is owned by Evergreen Marine (Singapore) Pte Ltd. The ship is 334.8 meters in length, 45.8 meters wide, and has a draft of 14.2 meters. In common with its L-type sister ships, it can cruise at speeds up to 24.5 knots.

With delivery immediately after the event, the vessel joins Evergreen Line's Far East – South America route and replaces an older unit on the trade. As a refinement to their original eco-friendly design, the L-type vessels built by CSBC this year are fitted with a brand new energy-saving bow. This improvement enables the ships to further enhance fuel-efficiency and reduce emissions. In light of the success of this design adaptation, Evergreen is conducting a bow refitting program. By the end of this year, fifteen of its L-type ships will be equipped with the improved feature.

As a core value of its corporate policy, Evergreen is dedicated to environmental protection and makes every effort to further cut its carbon emissions. In addition to building a fleet of eco-friendly ships, Evergreen also adopts carbon-cutting concepts throughout its service chain. In a recent development, the carrier introduced an innovative green transport service featuring Eco-trucks in Finland through its agent Greencarrier Liner Agency Oy. The 33-meter long truck can carry two 40’ containers simultaneously on permitted sections of roads, thereby cutting greenhouse gases by 40% compared to the alternative of using two individual trucks.