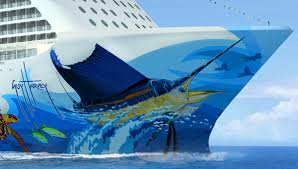 Norwegian Cruise Line executives and officials from Meyer Werft took part in the keel-laying ceremony of Norwegian Escape on Friday, September 19, 2014. During the ceremony, block number
35/41, one of 86 blocks that will comprise the 164,600 gross ton-vessel, was lifted into the covered building dock, marking the start of the block assembly for Norwegian Escape. In the dock, Kevin Sheehan, Norwegian Cruise Line’s President and Chief Executive Officer, laid the traditional “lucky coin” before the 400 ton block was placed by the 800 ton crane. Sheehan said:
“The start of the block assembly is a significant milestone and we eagerly anticipate the delivery of Norwegian Escape in the autumn of 2015.” The Norwegian Escape is the first of four ships with a length of 324.6 meters and a width of 41.4 meters that Meyer Werft will be building for Norwegian Cruise Line until 2019. “Today we placed one of 86 blocks”, says Bernard Meyer, Meyer Werft’s Managing Director. “We are proud to begin the construction of the new series and continue our partnership with one of the most innovative cruise lines in the world.” Starting from October 2015, Norwegian Escape will begin seven-day cruises from Miami to the Eastern Caribbean, taking 4,200 guests to the tropical destinations of Tortola, British Virgin Islands; St. Thomas, American Virgin Islands and Nassau, Bahamas. According to the shipbuilder, “the newbuilding will combine all the exciting and innovative features of both Norwegian Breakaway and Norwegian Getaway. On top of that, she will feature a series of new public rooms and interactive experiences.”
a 05:30