Container shipping to turn up the speed? 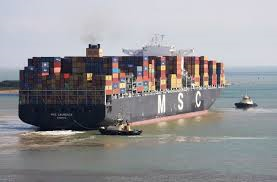 However, a question arises on what will be the next step on the supply side for container shipping, according to BIMCO. As the remaining issue in the sector are poor earnings with charter markets at
record lows, reintroduction of higher speeds opens up as one of potential options for the market. “If higher speeds were reintroduced, less tonnage would be needed in current trades. From this, cascading would intensify, fuel consumption and costs would go up and we have just seen how tight the market balance is. The demand side is not all-conquering, and why reverse all the cost-cutting initiatives that have brought a certain level of profitability back to the industry?”

BIMCO writes. Falling bunker prices bring the latter down and may therefore in some cases, all other things being equal, result in marginal costs that favour higher speed. A fight for market share naturally also plays a part in this, the association said. The demolition of container ships has stalled completely, following a hectic first half of 2014, resulting in an increase in the overall supply growth estimate, as the demolition amount is unlikely to exceed 400,000 TEU, thus bringing the net change to the fleet stock to a three-year high at 6.2%. According to BIMCO’s data, one hundred and eighty six new ships have been delivered, becoming the second largest delivery year on record in 2014; second only to the bumper year of 2008, that saw 1.5 million TEU introduced.

“New contracting for the year to date is now at 853,000 TEU, the aggressive new ordering of 29 ships in September is now behind us, with only five ships of 1,800-1,900 TEU being ordered during October and November,” BIMCO added. The total fleet size passed the 18 million TEU-mark in November and is now heading for a 19 million TEU-mark in approximately eleven months’ time. In terms of container shipping outlook, due to the return of great volatility in freight rates, some time will have to pass before market conditions re-establish a more stable market.
a 05:30