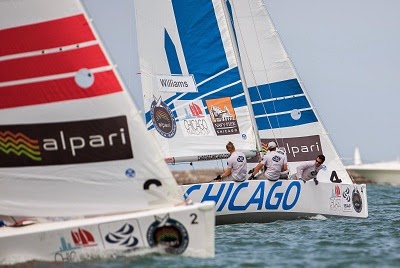 The world’s top match racing sailors are preparing to gather again for Stage 4 of the Alpari World Match Tour from Wednesday 17th September through Sunday 21st at the Chicago Match Cup, the
only US stop on the World Championship Tour. Six of the twelve teams that will sail in Chicago have Tour Cards, and as regulars on the Alpari Tour, they are also competing for a share of the US$500,00 Tour bonus fund throughout the seven-event series.

The other six teams competing have earned entry to the Chicago Match Cup by winning Tour Qualifier events or were selected as Wildcards. This year’s line-up includes eight of the top ten skippers in the ISAF Match Racing World Rankings and Wildcard entry Tom Slingsby, an Olympic Gold Medalist and strategist for the successful defense of the 34th America’s Cup- Oracle Team USA. One of the Chicago favorites among the Tour regulars is the reigning World Champion and 2013 Chicago Match Cup winner, Taylor Canfield and his Team US One.

Canfield, who is originally from the US Virgin Islands, sails with Rod Dawson (NZL), Hayden Goodrick (NZL) and Mike Rehe (USA) - the same team he won this event with last year. Although Canfield currently lies in third place on the 2014 Tour Leaderboard, his several years of experience and hundreds of hours in Chicago’s TOM 28 class boats will likely give him an edge over his fellow competitors.

Just a few weeks ago Canfield and team US One returned to Chicago and demonstrated their prowess on their home turf by winning the CMRC’s Grade 2 Chicago Grand Slam with an impressive 19-3 winning record. A strong rival to Canfield and keen to keep his current position as World No. 1 is four-time Alpari World Match Racing Tour champion, Ian Williams and his GAC Pindar team from Great Britain. Williams won the inaugural edition of the Chicago Match Cup on the Tour in 2012, and came in fourth in last year’s edition won by Canfield.

But on a string of impressive 1-2-1 finishes in the last three AWMRT events, Team GAC Pindar has strong momentum to do well again in Chicago. t slot is being filled by a young team from Denmark, Joachim Aschenbrenner and his Team Trifork, who made their AWMRT debut this year with a 7th place performance at Stena Match Cup Sweden. Joachim is the youngest skipper in the field, but only by a year to Chris Steele.
a 05:30